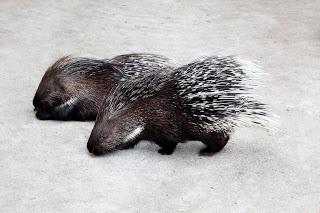 This is an excerpt from the book: Medicine Cards The Discovery Of Power Through The Ways Of Animals  by Jamie Sams and David Carson, Bear and Company Press, Santa Fe, New Mexico, ISBN: 0-939680-53-X

Porcupine has many special qualities, and a very powerful medicine: the power of faith and trust. The power of faith contains within it the ability to move mountains. The power of trust in life involves trusting that the Great Spirit has a divine plan. Your task is to find the pathway that is most beneficial for you and that uses your greatest talents to further that plan. Trust can open doorways to the creation of space. The space thus created allows others to open their hearts to you and to share their gifts of love, joy, and companionship.

If you were to observe Porcupine, you would immediately notice its quills. These quills are only used when trust has been broken between Porcupine and another creature. Much like Otter, Porcupine is a gentle, loving creature, and non-aggressive. When fear is not present, it is possible to feed a Porcupine by hand and never get stuck by its quills.

Through understanding the basic nature of this animal, you may come to understand your own need for trust and faith, and for becoming like a child again. In today's society, this is a needed reminder to honor the wonder of life and the appreciation of each new day as an adventure of discovery.

Porcupine sat silently, looking at a hollow log. She wondered if it was a playhouse that nature had created just for her. Porcupine envisioned all the things she could do with the log. She could climb on top and make the log roll from side to side. She could go inside and see if there were any juicy worms for her dinner. She could also scratch her back on the rough outer bark if she wanted to.

Just as Porcupine was pondering what to do next, she was Bear approaching. Bear was big and black and looking for honey. "Oh, another playmate to share my log." she thought.

Gruff old Bear snorted, "Porcupine, don't you know that I'm too old to play? You're in my way. I'm looking for honey. Go away!"

"Why Bear, you're never too old to play," she replied. "If you forget what it was like to be a cub, you'll always be as impatient and gruff as you are now."

Bear began to think about what Porcupine had said. Maybe she was right. All the other creatures had run away from Bear in fright. Even the other Bears had turned up their noses when he growled at them. This little Porcupine was certainly trusting him not to eat her. She even offered to be his friend.

The old Bear looked at Porcupine and began to feel something move inside him. He started to remember the games he had played as a cub. Joy started to live in him again.

"Little Porcupine, you have reminded me that in becoming strong and seeking answers, I got caught trying to be an intellectual. I became afraid of what others would think if I dropped off my gruffness. I was afraid they wouldn't take me seriously anymore. You have taught me that in being a fuddy-duddy, I was causing others not to care for me. Thank you. I'd love to play with this old log."

And so it was that Bear became childlike again, and learned the innocence of Porcupine.

In choosing the Porcupine card, you have given yourself a gentle reminder not to get caught in the chaos of the adult world where fear, greed and suffering are commonplace. The medicine in this card is that of relief from seriousness and severity. Open your heart to those things that gave you joy as a child. Remember the preciousness of fantasy and imagination, and the making of some game or toy from nothing but scraps.

Honor the playfulness of spirit that lets everyone win.

P.S. Here's my 'recipe' for playfulness. You touch someone gently with your index finger right on the tip of their nose, and pull it back. This becomes your new 'hello' just between the two of you. It gets to the point where you can touch your own nose in front of them, across the room, and they will know you are thinking of them, and they will touch their own nose back. A nurse in my old OR and I discovered that. It was our special sign, in surgery, that we were friends and thinking of each other down the hall or in a case.
Posted by Reiki Doc at 8:17 AM