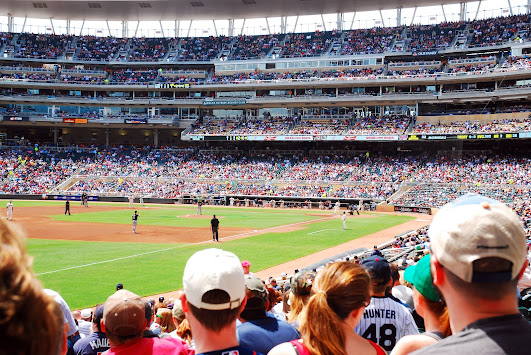 A lot of people I love and have cared about have met their demise in some form of large groups or crowds--in past lives lived of course.

Ross has been getting me exposed to large groups of people, more and more. I'm observant. I've grown to appreciate them.

So here is our point of learning today, plain and simple.

If you've ever been to a baseball game, the fans together create an entity all of its own. And when the umpire makes a stupid call, or makes a mistake, the fans are on it, loud and proud and clear, in an instant.

Even though they have their team preference, when it's a tough call, they accept it. And when someone else on the other team does a good play, they will remark amongst themselves, wow that was a good play.

These are the very same people many a lightworker has dismissed as 'sheep' or 'comatose by mainstream media' or 'brainwashed' or even 'under the influence of TWDNHOBIAH'.  Yes, TWDNHOBIAH do practice magic and have access to technology such as scalar wave directed energy weapons that we don't. There is a certain effectiveness to both types of 'artificial influence'.

I don't care how much tweaking is done by TWDNHOBIAH to turn 'white' into 'black' and vice versa--'good' into 'evil'.

There is a certain part inside every soul, on everybody who is incarnate, that is capable of good. Of recognizing good. Of responding to good. Of wanting good to win over evil.

For some, things get 'complicated'--if they are intergenerational hierarchy in the system, their survival has been compromised so that to survive they had to 'toe the line' but even then, I don't believe not for one second, that the little part inside that wants good ever dies.

Case in point:  in prison there is a 'justice' system, and even the most hardened criminals agree that pedophiles are a serious problem, and take matters into their own hands.

Another case:  Kerth Barker's Luciferian 'owner', 'The Baron', changed sides at the very last minute, and died a peaceful death going to the Lord Jesus.

Animals are angelic creatures, and are always following the will of Creator. Humans, do in fact have Free Will. But there's a good chunk of wholesomeness, even if it seems totally buried, that is indestructible. Only in the rarest of instances do souls choose to merge instead of heal, and go into the incinerator of Divine Mother/The Galactic Central Sun.

That's all I have to share for today. Ross nods his head, and is in agreement with today's topic.

Things are looking UP.