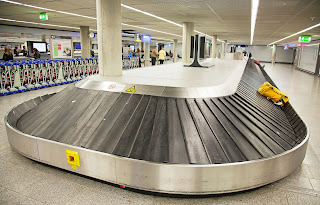 Yesterday I flew at the airport on a different carrier than I usually take when I go to Canada.

There was a forty-five minute delay on the tarmac. We couldn't go up into the air until something handwritten was faxed.

We missed our connection.

Anthony and I both ran as hard as we could, but it was another terminal and we had to take a small train to connect to it.

The plane had just shut the doors but was at the gate.

It felt like we were locked out of Heaven. Anthony burst into tears.

No one said, 'we are sorry' from this new airline. We were told 'it's FAA regulations' and 'go to the help desk'.

At the help desk, Anthony completely became unglued and it got very ugly.  The next flight was a four hour delay, and the day was ruined! The woman was very defensive and I had to make Anthony go and sit down. He hasn't had a meltdown like that in four years.

I was polite with the woman, but let her know her 'air partners' in France let us down recently and due to the strike we had to stay an extra day.

I was also firm and stated we had made the same exact vacation for six years in a row, five times with their competition, and never had a problem.

She helped us book on the next available flight from their competitor. She made a point to tell me with Anthony's outburst she almost didn't let us board any flight--and she didn't want to help him because she's never had any child ever talk to her like that.

I apologized, noting that not only did she never apologize or empathize with us once, but this must happen all the time, and here she had the nerve to demand an apology from me!  (the couple with the other help desk lady asked loudly, 'What is the best lunch in the airport your airlines is going to buy US for the delay?!')

I am used to Ross and his work behind the scenes.

For the strangest reason, for the whole day, I couldn't imagine anything other than Alaska taking us in to Victoria from Seattle. And I had asked Ross in the morning, I made a wish, to eat lunch here http://www.beechershandmadecheese.com. I wanted the mac and cheese.

What was ironic was that the restaurant was across from the gate for Alaskan (by the way, the nice lady at their help desk--says that the missed connection and surly treatment happens at the other airline all the time. I recall their putting us up in a hotel once, due to a flight cancellation due to weather conditions--which is rare--as well as their paying for meals. They also pay for a change of clothing you must buy if your luggage is lost.)

What was even more ironic was we had just enough time to sample a taste of the cheese (for this I was happy) but there was further another ten minute delay to board!  I looked at Anthony and he looked at me, and we had just enough time to buy the lunch of my dreams and a little wedge of the cheese for our trip! We ate it right before takeoff. It was comfort food in every way...

Once in Victoria, my luggage arrived but Anthony's didn't.

He was stoic but in shock.

What surprised me is the amount of work I had to take upon myself to get it back.

The woman at the counter was the Canadian Bon Qui Qui, and true to form she omitted the important piece of data on the form, gave me no receipt, then picked up the phone and flirted with some guy who worked at the airport.

I called Alaskan central baggage, and they got me everything but the crucial number--not the baggage ticket number, but the Claim Number.

I emailed Alaskan with the crucial information, which the Delta agent at their baggage center was able to provide for me.  He said it would allow the computer to track the bag and connect it to us at our hotel.

At seven this morning, I called the airport, looking for our bag. I also called Alaskan. They both thought the bag was in Victoria, and scheduled to arrive at the hotel.

Anthony noticed a message light on the phone, and called the front desk.

Our bag had arrived after midnight! They didn't want to awaken us.

So all is well.

Did the Delta Help Desk lady 'teach Anthony a lesson?'

I explained gently to him after her admonishment how in the airlines, due to terrorism and the fear, our only option is to 'suck it up' and be over polite. Even our cousin made a joke about a gun, missed his flight and was interrogated by security for three hours!

Did I catch up on my sleep? Almost.

Tomorrow is another day.

Did I pray for the woman who had the conflict with Anthony? You bet. I prayed very hard for her, but I did not send Reiki as I suppose she wouldn't permit it.

Did Ross help us with this?  Yes. In my heart I think he did.

I also am most grateful for the chance to be here again in Victoria, with Anthony, to enjoy the fresh air and hospitality.

It means more to me to be here than I thought it would mean, and I look forward to a wonderful stay.

Right now, I'd love some Dim Sum. It's Sunday and my asian friends in college used to always take me with them on Sunday.

You are on your way to great things.

I want you to put your mind first and foremost on the unique blend which is between 3D and 5D, as Carla describes in her inability to visualize anything other than coming in to Victoria on the Alaska Airlines Bombadier!  Her mind was tracking the future with accuracy but she wasn't able to 'quite place her finger on it' to explain why.

Soon this type of experience will start to happen with you.

My lady wants Dim Sum, and there's nothing else that will do!

Ross and Carla
The Twins
Posted by Reiki Doc at 1:27 PM