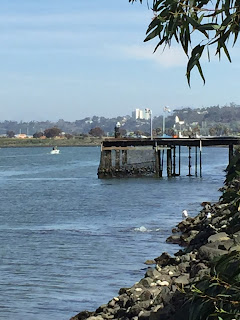 It's not being able to do what you would like to accomplish...or eat...or live...because you do not have the money.

There is also poverty of Time.  In my life, I do not have the ability to accomplish what I would like...or eat...or enjoy my living...because of my heavily intense work schedule.

There is also poverty of Spirit.  No matter how much money or time you have, no matter what...all of us as souls are trapped inside the limits of a thimble--when our natural ability, our birthright, is to live and play on an entire football field by comparison to the thimble!

This is common and unites us all.

The building at the top of the hill, just above the dock, is where my career as a physician started...my beginnings...at UCSD Medical Center in Hillcrest. It was the culmination of a lifelong dream to work as a doctor, helping people, and working with the science of medicine.  It also is an art, healing people, and  I hope to have advanced my skills above and beyond the curriculum both in Reiki and in Medicine, which I have been taught.

Gaia is sick and tired, absolutely disgusted, at the status quo.

Yesterday she sent out a call to the very highest beings who could hear her--and she had tears in her eyes--as her heart was yearning to be free of that which torments her:  the pollution of the mind.

There is a LOT more pollution in this realm, than in any other...and the people who are brainwashed by the mass media and entertainment industries...in her opinion...have gone too far.

If you know Gaia, and love her, you will understand her feelings, and do the very best to co-create with GOOD THOUGHTS, carefully 'weeding out' all of those of a denser, darker vibration.

Gaia has had enough.

She has presented her litany of complaints to the highest office there is, specifically stating that which she permits to be on her 'school', her 'surface'...and that which is no longer welcome to her heart.

In short, animals, children, nature, and people who respect all of the above, and work to assist those who are struggling or sick or in danger...stay. But ONLY those who have above all else Love in their Hearts while doing so.

Gaia has enough of the angry activists who give 'reiki' for a cause, for anyone who is worth their training in Reiki, true Reiki, will step aside and let go of the outcome, leaving it for the highest good. Those who embrace the energy of separation --for example, sending Reiki to a cause they don't understand, and impose their will on the outcome--Gaia will spit out of her mouth.  And Gaia has spit them out again, and again, and again, and is utterly sick of it, these people who PERPETUATE the energy of separation by their anger, their blaming, and their refusal to accept that we and the animals are ONE family, all of us welcome, all of us with our lessons, and all of us on one delicate ecosystem both in body, mind, and spirit up here in the cosmos of All That Is!!!

So for all the Galactic and Higher Dimensional Souls who have bravely come forth to raise the Truth in the midst of those unawakened, Gaia thanks you.

Now is your time.  https://gaiaportal.wordpress.com/2016/03/21/galactic-alignments-are-viewed-in-the-quantum-envelope/

You have worked very hard at this.

And Gaia has had enough.

Gaia has had enough!

Gaia has had enough of the war mongering and blame throwing and hypnosis of the people!

Gaia has had enough of the rape and pillage of her resources in the name of 'growth and development' for 'civilization'.

Gaia has enough of IGNORANCE of the the general surface population of the ways that are applied EVERYWHERE ELSE IN THE UNIVERSE BUT HERE ON THIS PLANET!

The full moon is almost here.

And Gaia has asked for All Divine Assistance.

As Jack Hanna says, 'the truth will stand, it will come out in the end' and 'you must touch the heart to reach the mind'....we may add, 'and reach the SOUL' too.


Yesterday was the best day I ever had...and so was Anthony's.

Ross had planned it.

He told me to wear my Balega socks because I would be walking around. I almost grabbed a different pair, but he wanted me to wear THOSE athletic ones.

On the drive there, Anthony and I were thinking of a friend, Jaime B-W, who had passed. We were close to her.  We always miss her. And her spirit came through, in her same voice, and said to me, 'I am still HERE! And I am without the pain!'  (she suffered from chronic pain while she was living).  We said we are glad and we love her, but it's not the same as being able to hug her and see her smile and spend time with her like we used to do when she was incarnate. (She and Anthony have the same birthday, of all things!)

She said she would send us a surprise, something miraculous, and we would know it was from her.

What she sent was a very special time Anthony and I got to share with two special persons, Fernando and Alua...that we will remember our entire lives...as well as with our new friends Kelli and Carrie and Chris, who made this special memory possible.   Fernando and Alua are advanced souls, with no guile whatsoever, and amazing hearts. 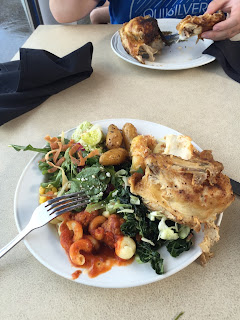 Jaime did well in her planning for Carla and Anthony.

Their souls are free.

Their souls are united with the happiness of having a day to reflect on where Anthony 'grew up'--a place he has went often with his mom since he was thirteen months old.  A place of importance to them in their hearts.  A place where the troubles of their personal life, the house that is falling apart, the long hours spent in study and at work, and the separation between them due to Anthony's co-parenting...doesn't exist....for the times they are at this place, they are delighted with family and friends and souls who are highly advanced, much like the soul of Jack Hanna, whom Anthony has met, and Jack will always recall with a smile (Jack was given a plastic toy hippo to sign with his autograph when Anthony was four. Jack was impressed with the accuracy of the model and asked, 'Where did you get it?' with a smile. Anthony said, 'At Target' (a popular discount store in the States)--Jack laughed long and hard over that...everyone seems to shop there, including himself.)

There is only one way, one truth, in Love--and it is clear as day to us where I am--just like Anthony precious child with his humble honesty, 'I got it from Target'--that will touch your heart.

Prepare to be amazed at what will take place!

What Gaia wants, Gaia will be given.  A realm of peace and prosperity, abundance and light, which copies the Higher Realms in every way--across the board--Galactic 101--no questions asked, no exceptions, for all of her inhabitants.

(raises finger up and moves it slowly from side to side)--What you discover may surprise you!  (he flashes a mysterious smile)

I didn't skip my vanilla fudge Anthony wanted to buy for me yesterday for nothing!  (he smiles and is in a good mood--ed)

Ross and Carla
The Reiki Doc Couple
and Family
Posted by Reiki Doc at 5:08 AM